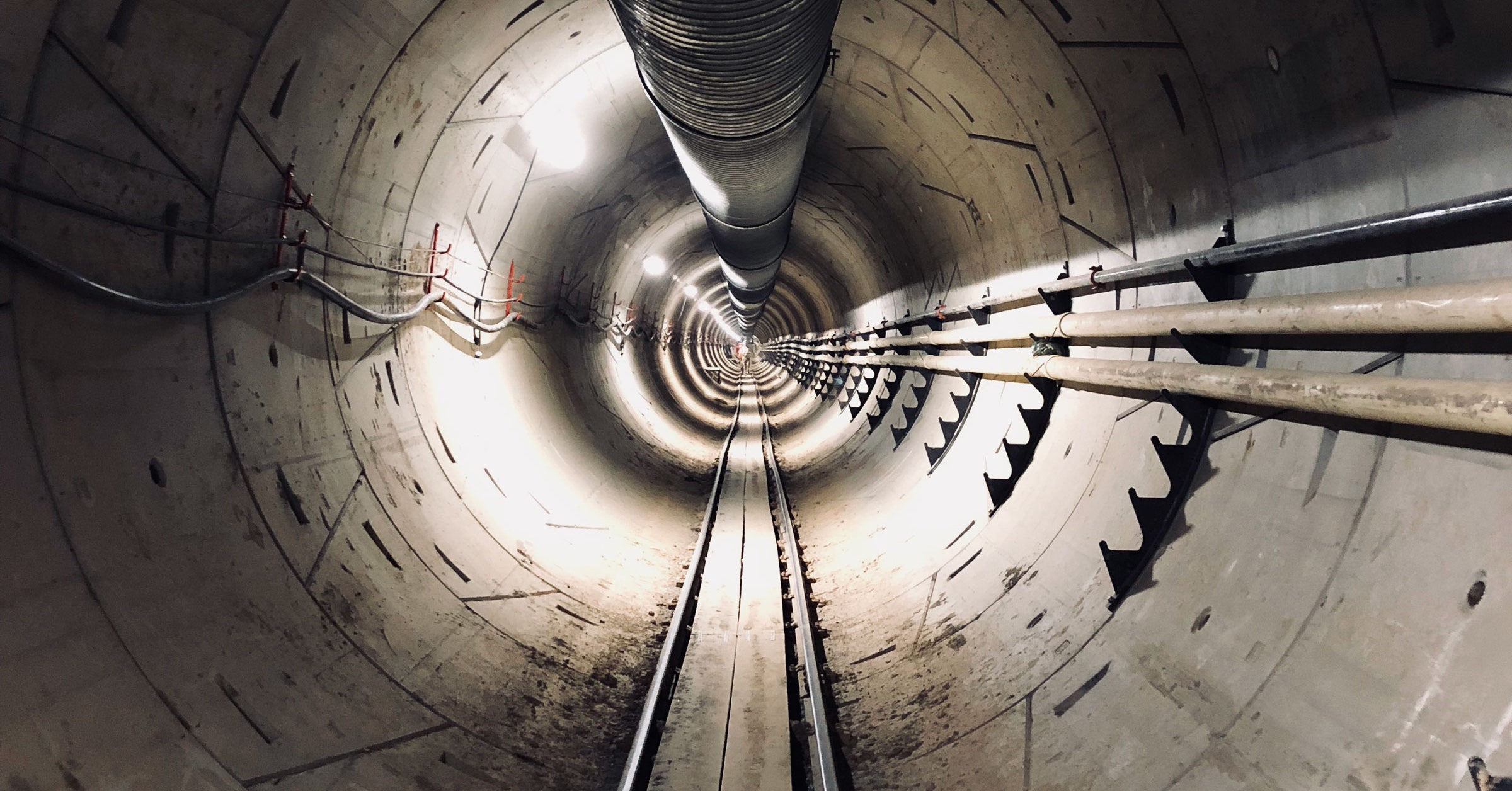 One day, if Elon Musk gets his way, the Leo Baeck Temple in Los Angeles’ tony Bel Air neighborhood will be just a hop, skip and a quick walk from the nearest Loop station.

The “Loop,” for the uninitiated, is what Musk calls his latest idea for moving people and things from one place to another. In his telling, you would bike or walk into a 16-passenger pod, or drive your car onto a street level elevator, which would ferry you onto an underground electric platform. For a measly $1, you’d be shot at 150 mph through a city-wide network of tunnels, until you reached whichever of the hundreds or thousands of stations fell closest to your destination, where another elevator would raise you back to the surface. This is different from the hyperloop, which would clock near supersonic speeds, and be used for long distances. But the goal is the same: no waiting, no gasoline, no traffic.

Today, though, getting to the temple, where Musk hosted the Boring Company’s first public informational meeting, requires crawling through miles of hideous 405 rush hour traffic. Or an even longer ride on the public bus, the only accessible public transit option, which tortuously wends its way through the Los Angeles hills.

Still, an hour and a half before the event’s scheduled start, a small crowd of people were pressing against the yellow tape holding them back from the main entrance. The few hundred folks who managed to score a ticket fell into two camps: local residents, typically older couples living in this wealthy neighborhood, and Elon fans, most of them young men in their Boring Company hats and SpaceX hoodies. They waited patiently for the CEO, who took the stage thirty minutes late. Guess why. “We were stuck on the damn 405,” Musk said.

During the 45 minutes he spent on stage, Musk laid out out engineering details, talked specs, fielded carefully moderated questions, and defended his plan to build a 2.1-mile test tunnel adjacent to the 405 freeway. That project, he says, will allow the Boring Company to determine the specific challenges of tunneling in this part of LA’s soil and bedrock.

“Highways are at the outer limit of their capacity,” he said as Gary the snail, his company’s mascot, silently inched across its pineapple-shaped terrarium, sitting next to the CEO. (Musk wants his tunnel boring machine to beat Gary in a race.) “For tunnels, you can have hundreds of lanes. There’s no real limit.”

Musk says he wants to give rides in the new tunnel, to get public feedback, and to feed into plans for a much larger system under the city. “It’ll be like a weird little Disney ride in the middle of LA. Bring your flamethrower,” he said, to laughs and whoops from the very friendly crowd.

Six months after Musk went on a Twitter tirade about LA traffic in December 2016, he had created the Boring Company, and was digging a tunnel under the parking lot at SpaceX’s headquarters in Hawthorne, California. The internet payment maven-turned-carmaker-turned-space enthusiast-turned-infrastructure baron has promised to completely change the way humanity bores tunnels, pledging make boring as much as 15 times faster, and reduce its cost by a factor of ten.

Thus far, the Boring Company is leaning on two used tunnel boring machines, and has yet to unveil any novel tech. But Musk did recently show off a completed, 2-mile proof-of-concept tunnel in Hawthorne, which begins in the parking lot of SpaceX’s headquarters.

Now, Musk wants to build this new, 2.1-mile tunnel, near LA’s Sepulveda pass. It’s all part of his broader vision of a sprawling network that could take riders from Sherman Oaks in the north to Long Beach Airport in the south, Santa Monica in the west to Dodger Stadium in the east—without all that troublesome traffic.

Boring has applied for a environmental review exemption for this tunnel, arguing no one will actually use it for transit. And while the LA City Council’s Public Works committee did approve the exemption late last month, it will need full approval from the entire council before the project can move forward.

Meanwhile, two neighborhood groups have sued the city over the exemption, arguing that it’s an illegal, piecemeal approval for the Boring Company’s larger ambitions—that whole network thing. (The Boring Company has pledged to cover any legal costs stemming from the project.) Culver City, to LA’s west, is mulling its own lawsuit, says Vice Mayor Meghan Sahli-Wells, even if the tunnel does not enter its territory. She decided against attending the event, however. “I don’t even think I’m going to try to bear the traffic,” she said Thursday afternoon.

Musk insisted the Boring Company is playing the good partner. “Sometimes people just wonder, ‘Are they just going and building this crazy tunnel, and seeking exemption from all oversight?’” he said. He insisted that isn’t the case, saying the company will have to fill out “something like 600 pages of permits” and complete a full environmental review before building a larger network.

Musk took time to reassure people that they wouldn’t feel the tunnelling process beneath them, and that the trucks hauling dirt away would be limited to daytime hours. As for earthquakes, he explained that tunnels are actually quite safe, and built to endure seismic rumblings.

Still, mass transit and boring experts have pooh-poohed the project. They wonder if the layers of tunnels might run into the same induced demand quandary as lane-widening projects. They wonder if money and time wouldn’t be better spent on proven mass transit systems, like Bus Rapid Transit. They wonder how Musk intends to improve the speed of tunneling so dramatically. They wonder if the Boring Company intends to connect its stations with other forms of public transit. (Yes, Musk said on stage. He said the project will solve induced demand issues by tunneling layers upon layers deep underground.)

The Boring Company has at least one important ally in its corner. On Thursday evening, LA’s Metro said in a statement that it had agreed to a “partnership” with the Musk venture. Metro did not respond to WIRED’s requests for clarification Thursday evening.

The final question Musk faced concerned whether he’d celebrate when the Boring Company’s system launches. “Of course,” he said. “I think a party in a tunnel would be kind of fun.”

Then he left the stage to a standing ovation, cheered on by a roomful of people just waiting for him go and build the thing.